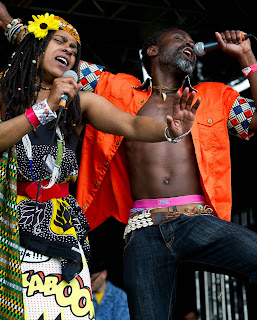 Yaaba Funk! Technicolour blasts of sound and vision. A sixteen legged groove machine that leaves not a stationary soul in sight.

2014 saw Yaaba Funk's second album, My Vote Dey Count released by the excellent Sterns label, a Yaaba Funk remix competition run by French DJ  magazine Starwax and Yaaba Funk at WOMAD Charlton Park for the first time where, on the hottest day of the year they drew a packed crowd to the Radio 3/Charlie Gillett stage.
2014 ended with a collaborative show entitled Hi-Life with acclaimed Brixton-based painter Abe Odedina, one of whose works adorns the cover of Yaaba Funk's My Vote Dey Count LP.
2015 sees plans for another collaborative show, this time with contemporary dance company Union Dance and a timely election year 'My Vote Dey Count' UK tour.
Vote with your hearts, your minds and your dancing feet! Vote Yaaba Funk!
https://www.youtube.com/watch?v=6L6ojcRP_EQ see them here

Fanfara
Are leading the parade, meet at the guildhall 10.30am not to be missed also on stage @ 2.30pm 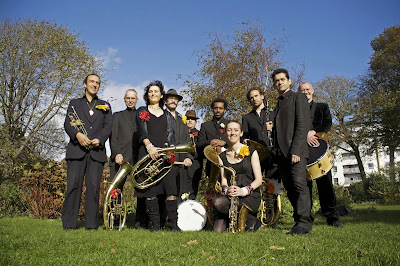 Fanfara plays music in the style of Eastern European brass bands - the best know being the Roma groups Fanfare Ciocarlia (Romania), Boban Markovic (Serbia) and Original Kocani Orkestar (Macedonia). Fanfara were originally inspired by Fanfare Ciocarlia, and gained expert tuition whilst staying with members of the band in their home village of Zece Prăjini. Since then, members of Fanfara continue to visit and study with musicians from Romania, Serbia and Macedonia. 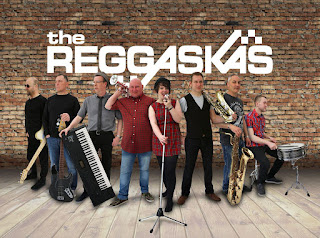 A Eight Piece Band Playing Original Alternative Music With An Unique But Cheeky Ska/Reggae Vibe.  The Reggaskas, teamed up with cancer freedom fighters ‘Balls to Cancer’ to release “Who’s the Daddy” just in time for Father’s Day. The Reggaskas are causing waves on the South Devon coast and are one of the brightest new bands in UK. 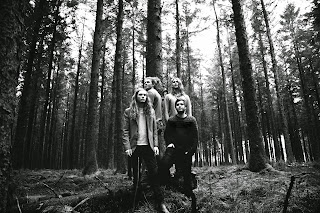 Haunt the Woods are an alternative folk rock band hailing from the shires of Cornwall. With a new and unique sound that combines their love of tradional and modern folk music along with gorgeous harmonies and spellbinding guitar, their live show really captures the energy and essence of the bands love and passion for music. (don't miss these guys are going places) 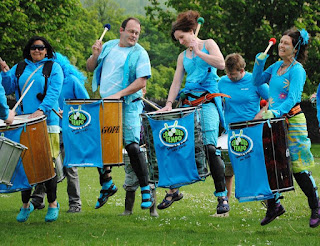 Crooked Tempo are a funky community samba band based In Devon.
Est 2001
They have have supported us many times with their great  Brazilian carnival percussion.

The Turbans on stage @4pm 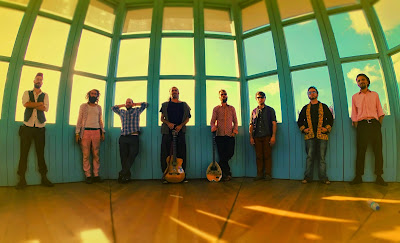 The Turbans is an international musical collective bringing together exciting traditional near-eastern and eastern-European styles and original compositions, to create a modern and energetic performance with reverence for its ancient roots. 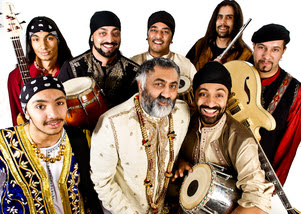 RSVP are spearheading the renaissance of live Bhangra in the UK and introducing Bhangra to mainstream audiences for the first time. Veterans at Glastonbury (5 years in a row) and festival favourites at Larmer Tree, Bath International, Port Eliot and many other festivals across the country they're always guaranteed to get even the most reluctant on their feet and dancing fit to drop.

With musicians drawn from one family, wholly rooted in an authentic living tradition, yet unafraid to innovate, this is the ultimate celebratory Indian music. Every show comes with an introduction to Bhangra dance - everyone's included with RSVP's emphasis on partying Punjabi style. RSVP will be bringing their Big Bhangra Beats and engaging, interactive vibe to Plymouth Respect Festival on Sunday 21st June  Get out your dancing shoes and get ready to party big time.


For more information on the group visit www.rsvpmusic.co.uk 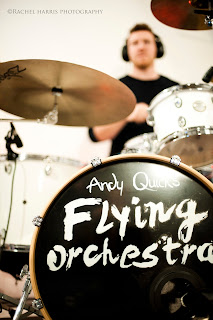 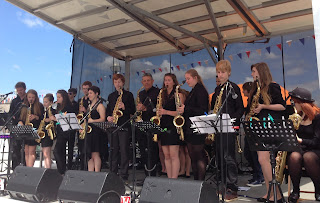 This dynamic and exciting ensemble welcomes suitable players from all Plymouth schools.
This fantastic band play regularly around the city , not to be missed there great